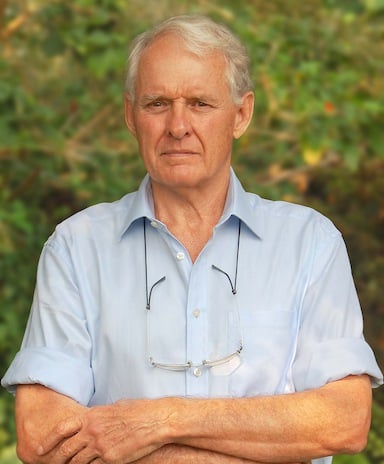 Australian biologist Jeremy Griffith has dedicated his life to bringing fully accountable, biological explanation to the dilemma of the human condition—how do we explain our species’ extraordinary capacity for what has been called ‘good’ and ‘evil’.

Jeremy began writing on the subject of the human condition in 1975, publishing the first of six books on the subject in 1988. His 2003 book, A Species In Denial, became an Australasian bestseller, while in June 2016 his definitive treatment on the subject, FREEDOM: The End Of The Human Condition, was launched at the Royal Geographical Society in London, with renowned mountaineer, Tim Macartney-Snape introducing Jeremy, and acclaimed humanitarian Sir Bob Geldof giving the keynote address.

Jeremy’s books have attracted the support of such eminent scientists in the field as Australia’s Templeton Prize-winning biologist Professor Charles Birch, New Zealand’s then foremost zoologist Professor John Morton, former President of the Canadian Psychiatric Association Professor Harry Prosen, and other distinguished thinkers such as Sir Laurens van der Post. A proposal to make a documentary about the human condition, The Human Condition Documentary Proposal, which Jeremy wrote the synopses for, received over 100 endorsements from many of the world’s leading scientists and thinkers, including professors Stephen Hawking and Nobel Laureate Charles H. Townes.

Each of Jeremy Griffith's published works is grounded in his first-principle-based biological explanation of human nature. His work is multi-disciplinary, and has been described as 'grand narrative' in approach, drawing from the physical sciences, biology, anthropology, and primatology together with philosophy, psychology, and psychiatry. He cites thinkers from all backgrounds and eras, from Socrates, Plato, and Christ, through to more contemporary philosophers and scientists, such as Charles Darwin, Pierre Teilhard de Chardin, R.D. Laing, Louis Leakey, Jan Smuts, Eugene Marais, Olive Schreiner and Sir Laurens van der Post.

It is important to note here that by definition all new ideas threaten the status quo and are therefore typically resisted. However, no new idea is as revolutionising and thus threatening of the status quo as analysis and explanation of the human condition. This is because the status quo, or prevailing attitude, has been to cope with the until now unexplained and thus unbearably depressing issue of our species’ human condition by living in almost complete denial of it. It follows that Jeremy Griffith’s explanation of the human condition will meet resistance and where that has occurred it has been strongly countered with rectifying clarification, which you can read about here.

The books and other publications Jeremy Griffith has written on his breakthrough biological explanation of the human condition are published by WTM Publishing & Communications.